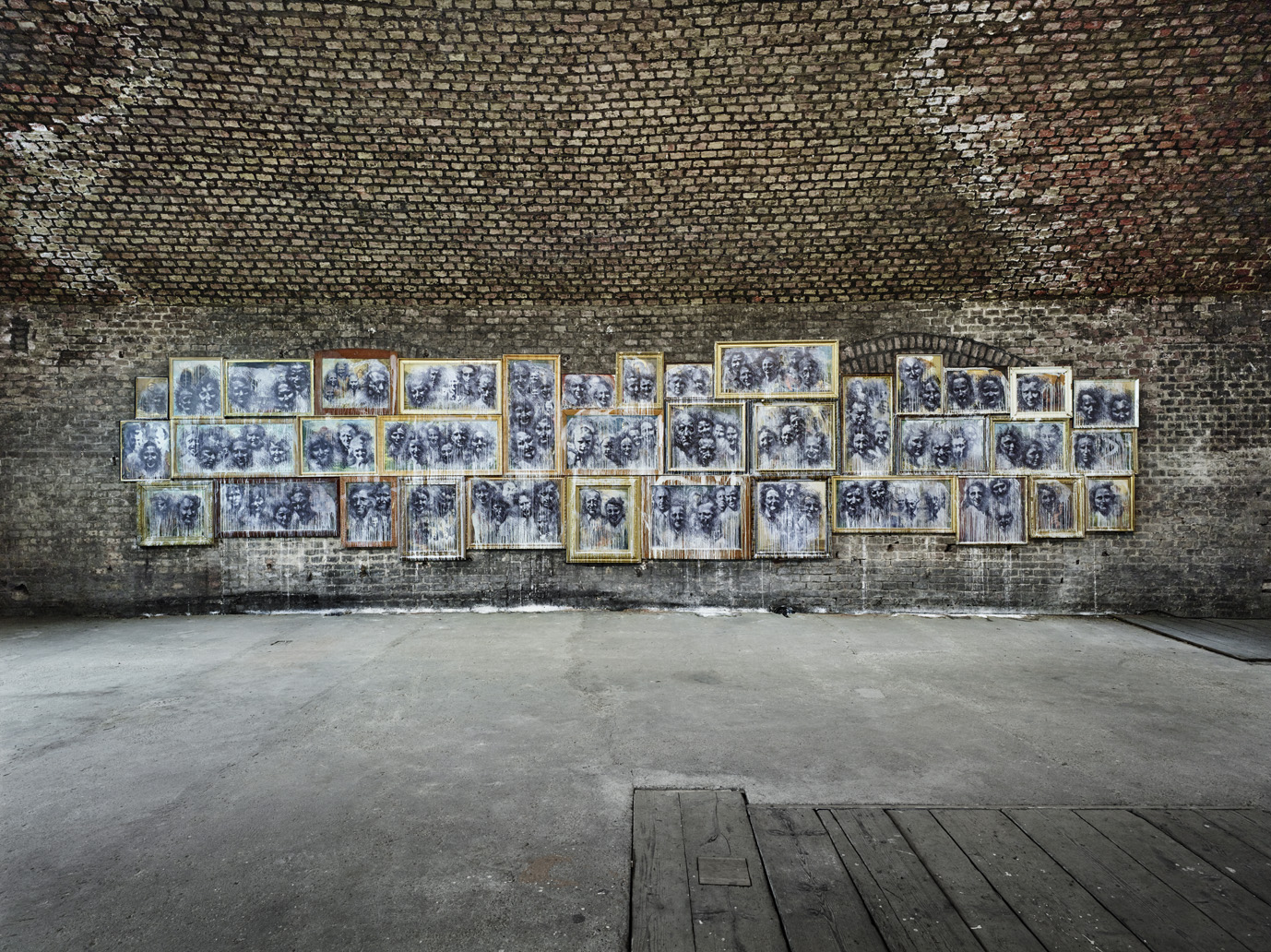 The belief. The Reproduction.
Heiligenschein deals with the danger-ridden "Führer"- and God-belief of people - integrated into the dynamics of masses, creating a movement between the original images and the sketchy portraits then superimposed on them. The work reveals the often unquestioning obedience to an authority that at the same time has the power to dramatically distort one's own human thinking and feeling. The work is based on reproductions of transfiguration depiction as a painting surface and also as a background, which can be attributed to the genre of kitsch. These representations in fact show an extremely dumbed-down reality and seem to veil it. Just as the portraits painted over it come from photographs of an illusory idyll. Both are supposed to suggest a kind of perfection.

Stephan Schwarz finds. Adam Bota paints.
In the present work, painted and drawn figures of photographs of real people join transfiguration representations and connect these two disparate and yet in many aspects tangential worlds. As in most of Stephan Schwarz's works, finding was at the beginning - a by-product of his movement through the world. He provided Adam Bota with a found object as a basis. In this case, it is "found" reproductions (at flea markets, junk dealers, etc.) from the late 19th century to the 1950s, some already in extremely - deliberately left unchanged - de-rigged condition. The paintings or the intervention of Adam Bota, on the basis of (again) found photographs from the 1920s to the 1950s - which now make the reproductions unique again, as well as their aging process itself - cover the transfiguration images and yet exist simultaneously. They almost "shine" over the underground.

The ladder. The kitsch.
Paintings with representations of a sacred or even a revered, romantically idealized figure or landscape were mostly painterly products in the 19th century. However, since such pictures usually had to be painted by artists in long, laborious work, they remained for the time being reserved for a wealthy upper class. Through the technique of image reproduction, it was finally open to a broader mass to acquire such valuable portraits. The affordable copies thus also found their way into the homes of the bourgeoisie. Sometimes a feeling of co-participation in something very exclusive developed: "I, too, can own the things of a prince and thus move a little closer to him - a little higher." Reproductions, then, are not special (anymore) because (almost) anyone can own them and they resemble the original. This arbitrariness is an important cornerstone of so-called kitsch. It arose primarily as a sham solution to an insoluble problem in the Romantic period: the bourgeoisie had gained power and influence, tried to reconcile the succession of the tradition of the nobility with that of the pursuit of profit. Thus, kitsch is also an essential part of the bourgeoisie's self-representation and is strongly related to the Industrial Revolution. There is a close connection between kitsch and the rise of the bourgeois class in its "civilizing" function. Photography, by the way, went one step further in terms of reproduction. It made it possible to immediately capture the present without much prior knowledge of craftsmanship (in its later developments) and then to reproduce it at will. When people from the family or friends are photographed, the ordinary is heightened in that it is immortalized and thus spiritually charged. An almost untouchable memory of the ordinary is created.

The appearance. The longing.
"Behind" the figures painted and drawn from the photographs are the figures and thought models of their superfathers. By transferring real photographs of the ideal world into painting, almost admonishing faces were created, far from the apparent happiness. We can catch a glimpse of the different generations: in their living room, at parties or soldiers with their families on leave from the front. Painting/drawing as well as photography - both contain images of the longings of their owners. They are like ladders to a supposed promise of salvation. The intimate view of a private situation is juxtaposed with a revered figure. The tense contrast of the real world of fallible people to the seemingly infallible saints emerges. In this work, there are only more glimpses of the message of the original paintings below. The mystical effect of the transfiguration images becomes fragile. The profane becomes sacred. Reality disintegrates. The stasis of completion gives way to the unfinishedness of the process. The photographs can defoliate and thus change in their original construction.

The destruction. The visible.
The intervention of overpainting seems at first like destruction, but instead expands the original content - even creates a charge of content. Only with the help of this partial deconstruction can there be the possibility of creating something from scratch. Heiligenschein opens like a window to threatening grimaces that stare at the viewer. In the working process of the painter, the people came out more and more. They "appeared" with the time - stroke by stroke, train by train. It happens with it a leading towards the human being, away from his ideologies. The work should give more space to the people themselves than to their leadership images and their representatives. The human being in his personality shall be put in the foreground again and not his ideologies and beliefs which are superior to his humanity. A moving and looking towards the individual human being away from the mantled mass, away from the transfiguration. A mass that, seen from close up, can suddenly be differentiated. The traces of white paint on the pictures act like a kind of fog. Man is a living being made up of many building blocks and individual factors - this is made clear by the artist's hard strokes. Above all, the viewer and his perspective of observation change a picture. In the approach of the viewer to the pictures the single human being becomes visible now but nevertheless at the same time already again dismantled. He disintegrates. This is also part of his humanity: a piecework of different layers and facets. Almost intangible - unpredictable. You just can't summarize people. There are so many more shades of gray. Being human is a state of AND instead of ABER.

To the development.
The work itself, in its outer form, underwent a transformation from a triptych to an abstract wing. Within the ongoing work process - beginning in 2011 - Heiligenschein grew to eventually 38 individual images. The visualization of an artistic process is the basic idea of this book. The respective elaboration stages of the working process follow the emotional history of the artists with regard to the work. The intermediate steps and the constant changes within the work were documented photographically. This resulted in the present book, based on the idea and execution of Stephan Schwarz. A work is namely so much more than the finally visible - usually called "finished" - end product - but it usually revolves in the sale on the art market only around the result - the final work. In addition, the work process was also accompanied by film and edited into a short film.

The belief. Reproduction.
Heiligenschein deals with the danger-ridden "Führer"- and God-belief of people - integrated into the dynamics of masses, creating a movement between the original images and the sketchy portraits then superimposed on them. The work reveals the often unquestioning obedience to an authority that simultaneously has the power to dramatically distort one's own human thinking and feeling. The work is based on reproductions of transfiguration depiction as a painting surface and also as a background, which can be attributed to the genre of kitsch. These representations in fact show an extremely dumbed-down reality and seem to veil it. Just as the portraits painted over it come from photographs of an illusory idyll. Both are supposed to suggest a kind of perfection.